On Sunday, Carlow booked a place in the Leinster Senior football quarter-final after beating Seamus McEnaney’s Wexford side in Dr Cullen Park.

The victory against the Yellowbellies was their county’s first provincial victory since 2011, which was a terrific achievement and a step in the right direction for those who have put in momentous amounts of efforts without any sort of reward.

However, questions must be asked about the quality of the side that they overcame. This article is not one to undermine The Scallion Eaters, but any inter-county Senior football side that can only manage 2-2 from play against Carlow have to be questioned. It’s as simple as that.

The loss of Daithi Walters to a black card in the 18th minute was a significant blow to the Model County’s aspirations, as this meant Carlow’s powerhouse midfielder, Brendan Murphy would be more instrumental than ever. He asserted his influence, scoring 1-2 from play with the crucial goal coming in the dying stages of the game. 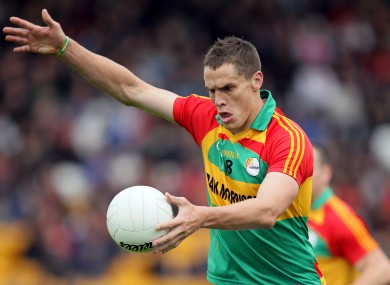 But a result like this was coming. It wasn’t really a “shock result” as stated in the media headlines. They are both evenly matched teams and the reality is that Wexford football is in a stagnating phase, and it has been for years. Unfortunately, we think that attaining promotion to Division Three of the League is a good achievement nowadays. The memories of a championship run similar to 2008 are now distant in our minds and it’s unlikely that we will witness those days again unless something serious is done to our structures and our own ideologies regarding football in this county.

It poses the question- what is wrong with football in this county? Certainly, football is the least preferred out of hurling and Gaelic football and the lack of interest is quite evident from promotions for matches and attendances at both club and county games. Although Wexford may be a “hurling county”, we also enrich ourselves in pride and there’s no pride in losing to Carlow in championship football. Ever.

Achieving League promotion is all well and good, but championship should always be the aim and the priority. Even though we bettered Carlow in the quest for League glory, the result today is reflective of where Wexford football currently stands and has stood for the past number of years.

If you would like to respond or submit an article, please do so by following the link.