Last week, it was reported that the GAA and Croke Park will not be opening the famous Hill 16 on Sunday for the Leinster hurling final.

On a day when Wexford will face Galway, the vibrancy, the support and the colours will be in abundance throughout Ireland’s capital. It will be the Yellowbellies first Leinster hurling final since 2008 and the colourful crowd they will bring will be nothing short of beautiful. The purple, gold, maroon and white will be a spectacle on the streets, in the stadium and on our television screens as hundreds of thousands will appreciate a game that is sure to promote our national heritage and sport across the globe.

The beauty of the purple and gold brings something different to our television screens. For the past number of years the purple and gold were missing in the hurling world, but in 2017 a resurgent Wexford team under Davy Fitzgerald has revived the fans happiness with a trip to the GAA’s finest stadium. Yet, the GAA’s and Croke Park’s decision to close the Hill for a “Coldplay concert” the following week is outrageous, and that’s an understatement. 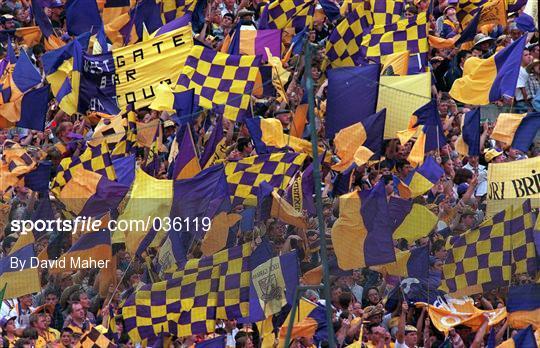 For many, the GAA’s decision to close the Hill is symbolic of the associations’ corrupt minds and their inability to understand the supporters’ wants. However, personally, I feel it speaks higher of their inability to think rationally.

If we take students, for example, they can venture into the stadium through the Cusack Stand. After they pay the full amount for a ticket, they receive a 10 euro concession. Other than the Cusack, students will not receive a concession and are forced to pay the full price of €35. As there are only a limited number of tickets for the Cusack stand available, many students won’t receive a concession and will be forced to either buy a ticket and enter through the Davin or Hogan stand. Logically thinking, it would be indescribably better to make the Hill 16 a student-only terrace and fill as much as possible of it – even if only one section of the terrace remains open. The GAA would not lose out on their potential profits, and the game would not lose out on its brilliant atmosphere.

Notably, just last week, we saw the Leinster semi-final between Dublin and Westmeath which was attended by approximately 29,000 people. On that day, the Hill remained open- and that was simply to accommodate the Dublin supporters. Speaking to one supporter about Croke Parks decision to close the Hill, Val Flanagan said it was “discrimination of the highest order and an insult to the intelligence of all patrons from Galway and Wexford.” It seems that there is one rule for Dublin and another for the rest of the counties. Interestingly enough, the last time Hill 16 opened for a Leinster hurling final was in 2013 when the Dubs faced Galway.

It doesn’t take a genius to come to the conclusion that the “Coldplay concert” is just another way to say that the GAA want more people paying the full price for a ticket. Even if the Coldplay concert is just a rumour, that is not the point that should be addressed. No matter how the association rationalise the situation, the reality is that they do not want people that should be paying €35 getting a thirty-per-cent discount on a ticket for the terrace and that is simply unfair for loyal supporters and GAA community members who are the backbone of the association.

Instead, at the game on July 2nd the Hill, which holds a maximum of 10,000 people will be bare while the beauty of the terrace remains a forgotten and rare aspect of Croke Park. Even though the lower stand has already surpassed its capacity in ticket sales, the GAA decided to open their upper-tier at the same rates and once again opted against the opening of the Hill. On a day when over fifty thousand people are expected to walk in the turnstiles of Croke Park, there will not be one single person walking through the historic railway end turnstiles to make their way to find a place on the terrace.

Twelve years on and still in our memories as Wexford supporters is one of the best Model scores of all time after an amazing piece of skill by Eoin Quigley. However, what still remains evident in our memories and on the video playbacks is the empty Hill 16 which devalues the terrific atmosphere of 2005 and importantly fails to promote our beautiful game to the wider eye.

As seen in the top picture, a full terrace is a thing of beauty. In comparison, a grey, dismal and non-atmospheric terrace is symbolic of corruption and illogical thinking.

When the game of hurling is in dire need of increased promotion, illogical thinking like this will do nothing to help that cause.