Wexford Wanderer Brian Deeny and Rathnure youngster Charlie Tector were to the fore in their appearances of the bench, including a debut for Tector at outhalf.

Deeny, who launched off the bench on the hour mark, put in a massive performance thundering around the pitch with some heavy hits. His first input was helping to lock out an impressive scrum in the engine room and later proceeded to put huge pressure on a Scarlets lineout. What occurred next was a sequence of solid tackles by Deeny over the next ten minutes where he put in five text-book and no nonsense hits on the opposition.

Charlie Tector marked a proud moment for himself, his family, friends and all in Rathnure, Enniscorthy, and Co. Wexford as he became the latest Wexfordian to don the famous Leinster jersey in the 70th minute.

He did his basics very well with a nice nudge into the corner off a penalty for a 8 yard lineout in which Leinster went to a maul and obliterated the Llanelli pack a bit too well for Charlie as it was awarded as a penalty try robbing the Rathnure man of a conversion from the touch line which would have been a class opportunity to show his goal kicking prowess and by the new rules nicked any conversion attempt by Tector.

I believe that he does technically get the two points on his Leinster record, however.

Shortly after saw the two Wexfordians work in sweet symphony as Wexford Wanderer Deeny buried at Llanelli Scarlet with a bruising tackle, which forced a knock-on. The always alert and alive former Enniscorthy RFC man Tector pounced on the loose ball to set up and relieving clearance kick by scrum half Nick McCarthy. Not to be outdone, Deeny cleared up a similar mess shortly after as the game got scrappy towards the end.

Charlie was incredibly unlucky to fumble an intercept in his own 22 in what was yet another, and I have said this before, fabulous trait the Rathnure youngster has which is focus and vigilance to either danger or opportunities to spoil potential opposition attacks.

The two Wexford men did really well in their cameo’s which bodes well for their future with the Province. Deeny and Tector savoured the handshakes of their teammates on a job well done.

In a lovely moment after the match in the Leinster dressing room at Parc y Scarlets Charlie Tector a young Rathnure legend at the mere age of 20 received his first Leinster cap from scrum half and Irish international Luke McGrath.

Later he posed Cap on head with his two fellow debutants with a great picture stand side in Parc y Scarlets, Llanelli. 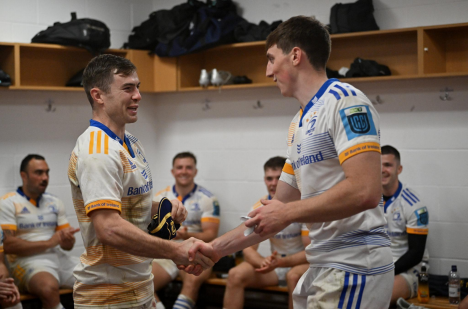