Christmas time is supposed to be a period of rest, relaxation and an escape from trials and tribulations of the year…

But this Christmas was different for many. Residents of Bridgetown and other such villages across county Wexford had no such respite. Their Christmases were marred with deep rushing waters invading their homes. No family should have to endure such disruption and horror on Christmas morning, yet this was the unfortunate, grim circumstances which greeted many Wexford families on the morning of the 26th of December 2021.

Shocking images spread rapidly across social media alerting the county and nation at large to the plight of those affected. Families fought bravely against the invasive water and the emergency services altruistically spent their Christmas Day aiding those affected by this disaster. Helicopters and lifeboats helped many escape the rising tide and brought them to safety.

In the face of this monumental catastrophe, the affected communities and those that surrounded them pulled together admirably in the face of adversity. Yet the horror that these families faced on Christmas morning cannot be understated.

Instead of being faced with a peaceful morning opening presents with their loved ones, they were forced to evacuate their homes and wade through the flooded rooms of their homes, salvaging what they could.

As a bright winter’s dawn heralded the beginning of St. Stephen’s Day, the horrendous flood waters which had been plastered all across social media had abated and began to recede from the streets.

In order to meet with Councillor Codd and to grasp the magnitude of this disaster, I journeyed to Bridgetown on the morning of the 26th and the destructiveness of the flood was clear to see due to the devastation it had left in its wake.

The scene was not one of hope and of peace which one has come to expect on St. Stephen’s Day and instead, it was one of despair, hopelessness and destruction. Furniture lay discarded on the footpath; due to extensive water damage they were destined for the dump, ruined by the heavy floods.

On the floor of the Men’s Shed in the village, a thin layer of black murky water lay atop the tiled floor, while the walls were stained, still soaked from the waters which had breached all barriers.

Speaking on the devastation the flood had caused, Ollie Daly of the Men’s Shed stated “apart from the fact there’s physical damage done…the social aspect has been affected”. The Men’s Shed which had provided invaluable services to the local community had been hit hard by the flood. Mr. Daly went on to state “It’s hard to deal with tools being missing” and the fact that the Men’s Shed would not be able to open its doors for some time was by far the worst consequence of the floods.

The residents of the village tried valiantly to salvage what they could, the strength of the community was evident as the village pulled together as one. Neighbours sympathised over the considerable destruction the high tides had wrought, the roads leading to the village were littered with gravel and debris which had been dragged out by the waters. These same roads had been covered by rushing bodies of water, and it seemed as though rivers had appeared overnight and claimed the roads of the area.

Many cars attempted to cross these perilous waters and found themselves stuck.

Among those who had given up large chunks of their Christmas Day and St. Stephen’s Day to aid the people of Bridgetown was Aontú Councillor Jim Codd.

Cllr. Codd spoke of how his constituents had told him of the horrors which they had observed in their own homes. He had spoken to older residents who didn’t recall such a severe flood in their lifetime. He stated how one Bridgetown resident had described the traumatic scene of seeing their Christmas presents floating around in the flood water, a scene which he described as “heart breaking”.

Codd spoke of how he had witnessed business owners and local residents in tears who had had their “lives turned upside down.”

In order to highlight the sheer volume of water which was present on the road, the councillor noted how even in his 4×4, he struggled to drive through the rising floodwater earlier in the day and how the roads were impassable come evening time. Codd also stated that he had to pull many cars from the water. He remarked on how when speaking to three generations local publicans in the village, the water in their home rose above their washing machine. He also told me of how water in a house in a village had risen “seven steps of the stairs”. The images which the Councillor described are nothing short of devastating, scenes had brought grown men in the village to tears.

Yet, according to the Councillor, this incident was not unforeseen.

“Two meetings back that I spoke of the need to improve our drainage in the low lying areas of South Wexford,” he said.

He stated that such measures are simply common sense due to the fact that much of South Wexford is below sea level and hence floods such as the one we saw on Christmas Day are almost inevitable without proper preparation. He bemoaned our tendency “to address these things after the event” and not be more proactive in our approach.

The Aontú Councillor stated that “the canal in Bridgetown needs to be dredged”.  He stated that it was very clear where the “pressure points” are due to the fact that lighter rain will often see them flood and the torrential rain observed on Christmas Eve and Christmas Day will lead to floods such as the one that has just occurred, which he labelled as “life-threatening”.

Codd called on the Office of Public Works to address the sluice gates in Kilmore, which he recalled were once opened regularly at low tide. He stated how panicked constituents had contacted him begging him to try and see if the sluice gates could be opened to try and remove some of the flood water, but at that stage, it was simply too late.

He stated now in the direct aftermath of the disaster that the local authorities needed to provide skips and dehumidifiers to aid the people in getting rid of the debris and waste and to help them reclaim their homes. Councillor Codd also spoke passionately and at length on the need to support those who did not have insurance.

He called for clarity from the insurance companies on whether or not these homes were covered or not for flooding and if they were not “somebody needs to step in here”.

He stated that many homes were in flood plains and other areas known for heavy flooding and as such may have been refused insurance. Yet the Councillor maintained that if a home had been granted planning permission and it was unable to get insurance, it was the duty of the Government to step in and to help these families reclaim their homes and indeed their lives. He stated that in similar incidents in the past the government has stepped in to help those who had been affected, and on that precedent, he hoped to see those who had been affected by this flood see the same treatment. 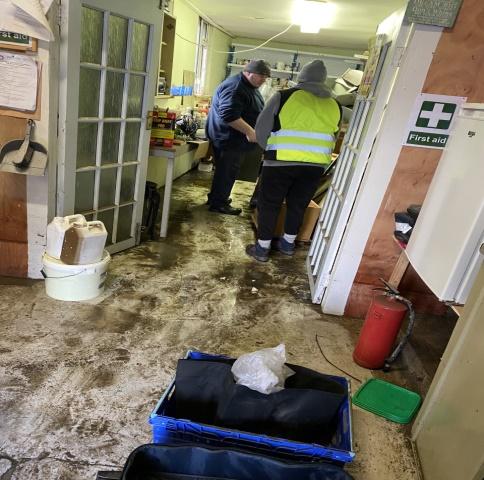 The Councillor relentlessly praised the generosity, resilience and humanity of the people of the village, and he noted that he was “really taken” with the generosity which had been displayed.

He told the story of one woman who rang him and informed him she had “more Christmas dinner than I ever need” and if someone needed some dinner, she was more than willing to provide it form them. He also told of how suites of furniture and beds had been offered for those affected. He praised the emergency services who had missed their “Christmas Day and Christmas dinner” to help those who were trapped by the flood or adversely affected in anyway. According to the Councillor, they went above and beyond the call of duty offering their services wherever they were needed.

He also heaped praise onto the Ferns Diocesan Youth Service centre in the village who remained open during the day and offered shelter to those who had been forced out of their homes. He made sure to offer special thanks to Tom Enright CEO of Wexford County Council and Caroline Godkin Acting Director of Services for Wexford County Council, for coming out to survey the damage done to the village on the morning of St. Stephen’s Day.  He informed me he was “delighted to see them out here”.

When asked what those who were eager to help those affected could do to help he stated “if you want to help give me a bell” and he would be more than happy to tell you if there a need for what you have to offer. He stated that “you would be astounded at how good people are” which is a testament to the way in which the community has rallied round those affected.

The Councillor made sure to note that Bridgetown was not the only area affected and many areas such as Duncormick had been left devastated by the effects of the flood also.

To conclude, he stated that now was the time for those of the affected communities to “pull together” and to not be afraid to reach out for help.

The Councillor summed up the devastation of the flood, the strength of the community and the need for action when he stated “in sad times like this humanity often shines through well now I’d ask the government to show the same level of humanity and start to address these problems such as the drainage problem. We need monies to put Bridgetown and the other houses beyond Bridgetown back in order who do not or could not get insurance because of living in the floodplain”.