‘As a Wexford local I like to think I know my town pretty well, but here I was surprised by art exhibited on streets I have walked hundreds of times…’

Nothing lights up an urban area quite like a mural. Muralists have long excelled in utilizing ordinary buildings to produce beautiful and often thought-provoking artwork. A good mural can intrigue, captivate and even inspire.

Murals can be found all around the world and often tell you a little something about a place’s politics, history or culture. In Ireland, murals have long been associated with political struggle, with many being found in Northern Ireland commemorating figures such as Bobby Sands. Other murals have acted as modes of cultural expression, including a beloved mural painted in Derry that pays tribute to the beloved sitcom Derry Girls.

Like many a town and city, Wexford is home to its fair share of stunning murals that tell their own little stories about the Model county. When I decided to chronicle them for this column, I found myself initially taken aback by how few I was aware of.

As a Wexford local, I like to think I know my town pretty well, but here I was surprised by art exhibited on streets I have walked hundreds of times.

Starting in Redmond Square, I embarked on a short quest, a scenic tour of urban artwork across Wexford town. A thoroughly enjoyable trail, I recommend it to anybody looking to put in an afternoon taking in a portion of the artistry Wexford has to offer.

Naturally, I took many photos on my journey. So, without further ado, here is our guide to some of Wexford’s best and brightest murals.

Wexford behind the walls, Redmond Square

This beautiful mural can be found in the alleyway between Redmond Square and the car park behind Sam McCauley Pharmacy. The views depicted are stunning and the dark colours evoke nostalgia and sentiment.

Just when you think the mural could not get more impressive, you notice a clever twist; the views depicted in the artwork are encompassed by painted-on bricks, making it appear as though you are catching a glimpse of Wexford through broken walls.

Coming through Sam McCauley Pharmacy’s car park and through an alleyway onto Skeffington Street, we have perhaps one of the most impressive murals in Wexford, the Woman with a Pearl Necklace. A recreation of a painting of the same name by Dutch artist Johannes Vermeer, this mural towers over the quiet side street and makes for a breath-taking sight.

Approaching the quay you have a small mural of Wexford’s coat of arms, accompanied by a friendly shamrock. While less glamorous than many of the others on this list, something about this mural’s simplicity and location makes it a heart-warming sight.

This incredible mural can be found at the side entrance to the Crown Bar. Bursting with colour and intensity, it is a welcoming sight for both passers-by and regulars to this popular restaurant and bar.

Across the road from Wexford’s iconic train tracks lies this lovely tribute to Irish Rail. The chalk outline of various commuters really captures the hustle and bustle of everyday life.

There had previously been a mural dedicated to Star Wars here that was later painted over; as you can see, a certain famous Jedi managed to make his way onto one of the carriages. 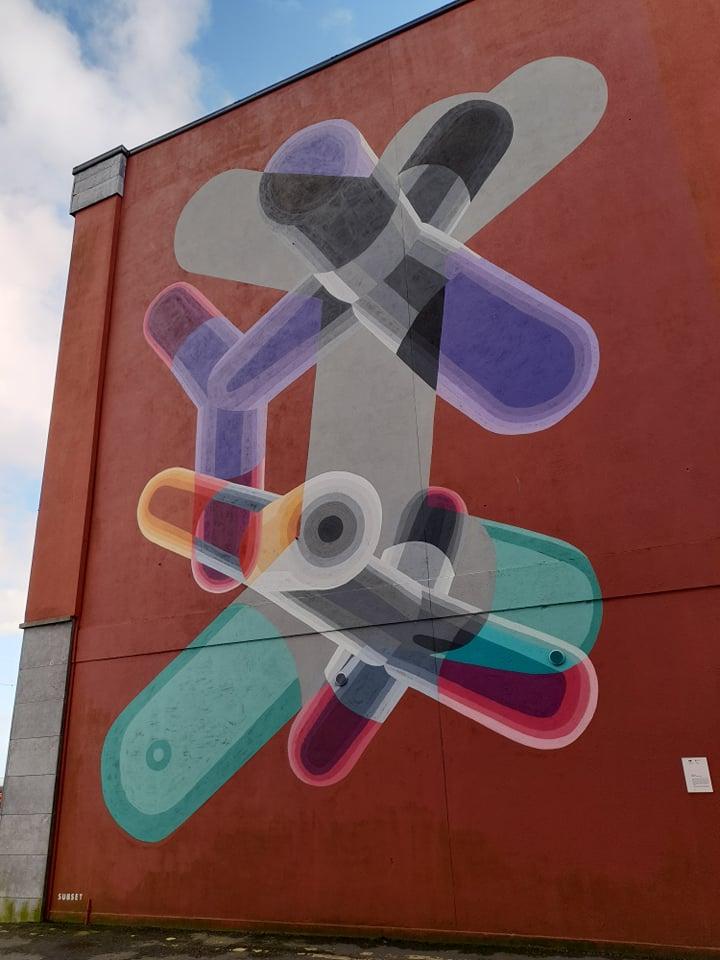 In the words of Monty Python, ‘and now for something completely different’. On the other side of the quay, we have an untitled piece by the group SUBSET, which depicts a 3D model of the natural plastic Cellulose Acetate.

Commissioned by the Science Gallery at Trinity College as part of the PLASTIC national exhibition, this eye-catching mural is designed to provoke discussions on reducing the adverse impacts that come with plastic consumption. 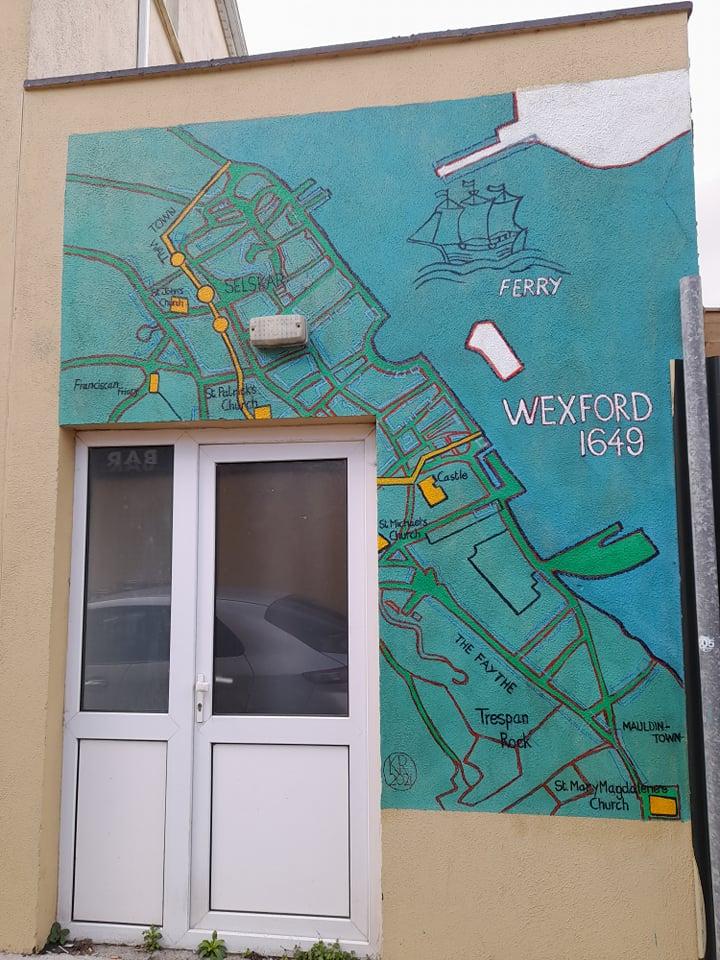 Around the corner, we have a creative historical mural in the form of an old map of Wexford. Depicting Wexford in 1649, this carefully designed mural is a glimpse into a time gone by and heightens our sense of connection to the past.

Last but certainly not least, we have this wonderful tribute to the legendary accordion player and Faythe local George Ross. Ross’ long list of accomplishments includes winning the All-Ireland Button Accordion Championship at the Fleadh Cheoil in Ennis in 1956 and appearing on the renowned Johnny Carson show in the United States.

The impressive artwork was a community project organized and supported by Paddy Berry, Liam Turner and participants in the Men’s Breakfast Morning at the Southend Resource Centre in Maudlintown.

What I love most about this mural is how it paints a picture, if you can pardon the pun, of a character who was larger than life. As you walk towards town through the Faythe you can’t help but admire this monumental portrait as you stroll by.

With plans to develop a large-scale art project in Wexford town being approved last summer, you can expect to see more murals spring up in town soon. In the meantime, let us know what your favourite Wexford murals are and which ones we missed!

Enjoyed this article? Let us know and perhaps we’ll do a piece on the Enniscorthy, Gorey, and New Ross murals next.